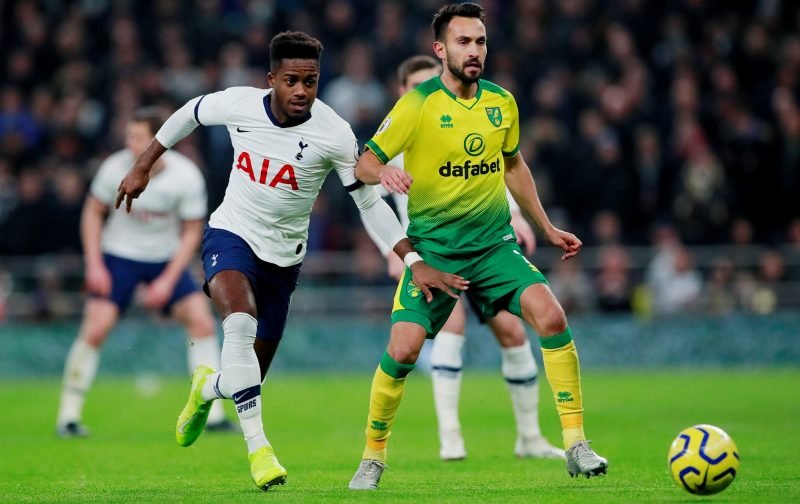 With the summer transfer window now basically upon us, teams across Europe are beginning to make moves in the market to improve their squads for next season.

Spurs currently have three players who are currently out on-loan and could find themselves in demand too, and whoever the new manager will be, they will definitely have a difficult dilemma to deal with as what to do with Cameron Carter-Vickers, Juan Foyth and Ryan Sessegnon.

Central defender Carter-Vickers has had an immense season on-loan at Championship club Bournemouth, building upon his very successful spell at Luton Town the season before in which he helped them to escape relegation miraculously.

#thfc AFC Bournemouth are in talks with Spurs about a permanent transfer for Cameron Carter-Vickers. The defender has one year to run on his contract. [@kristemple] pic.twitter.com/mnCercP2PB

Many teams are thought to be admirers of the USA international, who is likely to be available this summer for around £10-15 million – ironically the same price that Toby Alderweireld may cost.

However, there is a lot of interest from teams in the lower-half of the Premier League including Newcastle United, who believe that the defender is ready for the top flight – which begs the question, should this homegrown talent be sold instead of the likes of Alderweireld, Eric Dier and Davinson Sanchez?

Brilliant brilliant season for Cameron Carter Vickers. Given a chance and been solid all season for them 🍒. The defeat today was never on him. His stock risen massively and I hope he gets a good move. Take a bow son! 🔥 pic.twitter.com/JsoyDFCKSy

Any one of that trio is likely to be heading out the exit door this summer, and Carter-Vickers has some brilliant physical attributes like his pace and strength which if the right manager walks through the door and takes the reigns at the club this summer, could be admired and help him become a squad player in the first team.

Argentine international Foyth has also enjoyed a successful spell on-loan, but this time helping his temporary club to a Europa League title as Villarreal beat Manchester United earlier in the week to lift the trophy while the right-back found himself with heavy cuts to his eye, nose and lip following an accidental collision with Paul Pogba.

However, his stellar performance on the big stage may have convinced the Spanish team’s boss Unai Emery to make the loan deal a permanent one, as Foyth showed not only his defensive ability by keeping Marcus Rashford very quiet all game, but also showing his ability to comfortably play his way out of trouble.

Villarreal can sign the 23-year-old for just £13 million this summer thanks to a bargain clause in his contract which clearly wasn’t thought about too well by the Spurs hierarchy, as based on that performance alone, Foyth should definitely be going for £25 million at least.

But, if we can, Foyth should be kept in the squad, as he adds more composure to the back-line than the rest of any of the other starting defenders combined, and with Serge Aurier likely heading out of the exit door, there could be an opportunity opening in the right-back position.

Once the most exciting young player in England, now a player at risk of heading towards mid-table obscurity at a foreign club unless he revives his development and remains fit and in-form.

Can’t wait to see him back in a #Tottenham shirt and fighting for a place in the starting 11💙 #COYS #THFC https://t.co/v3EOvSVCGE

The question that needs to be asked is whether or not the left-footer is a full-back or a winger, as he clearly has attacking prowess which he showed during his time at Fulham, as well as against Bayern Munich in the Champions League on his full debut.

Next season, we think he should be on-loan at a club that will either use him as a winger or a wing-back in a back-five formation, like the one that linked manager Antonio Conte played at Inter Milan over the course of this last season.

A club like Inter would be a very smart loan move for Sessegnon due to their finances in disarray and their Champions League spot, but any club of that stature would be a desirable option for the Englishman who needs to have a big season to avoid being sold next year.