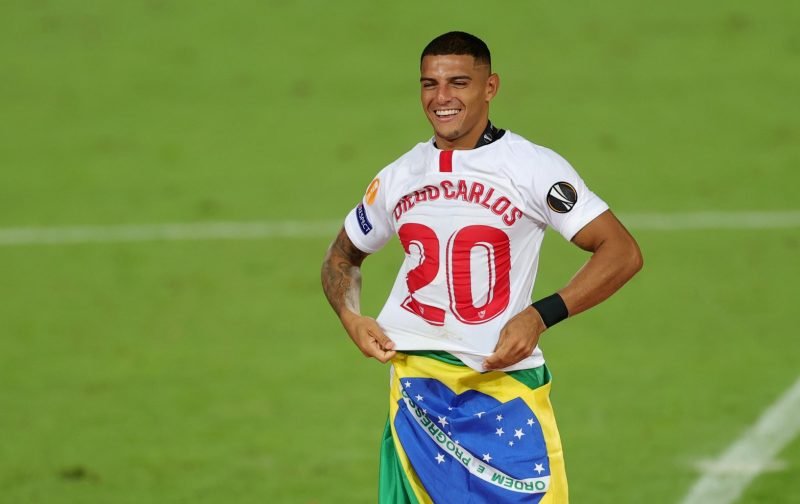 As the summer transfer window approaches, Spurs are becoming linked with more and more players to bolster the squad as fans remain desperate for an overhaul.

The centre-back position is one which is a priority for Jose Mourinho, and a number of players have already been linked, including Brighton captain Lewis Dunk, Southampton giant Jannik Vestergaard and versatile Napoli defender Nikola Maksimovic who’s contract is expiring at the end of the season.

Now Diego Carlos is the latest name to be linked with a move to Spurs, but the Sevilla star is reportedly at the top of Jose Mourinho’s shortlist alongside Milan Skriniar to revitalise the backline after his incredible form next to Frenchman Jules Kounde in the centre of defence for the La Liga side.

The deal could be sweetened even more for Sevilla, as they are very interested in signing Davinson Sanchez, a player Spurs are reportedly interested in selling at the end of the season after his particularly poor form over the last few years.

Sanchez, 24, still has plenty of potential and there are still people at the club convinced that there is far more to come from him and he can still become a world class defender – but after this season, it seems like us fans’ minds are made up.

Carlos, 28, has a price tag of around £64 million, but Daniel Levy will be confident he can negotiate that way down if he adds in Sanchez as part of the deal too.

Diego Carlos is also very impressive on that kind of category too, his passing game is kinda underrated too pic.twitter.com/FosueoLMZD

Liverpool have also been linked with the former Nantes player, but Spurs seem to have moved ahead in the race to sign the Brazilian who would link-up with former teammate Sergio Reguilon.

Despite his extortionate price-tag, Carlos has never appeared for his nation, and has made just 204 appearances for his clubs in their respective leagues, so the question has to be asked if the fee is worth it for a 28-year-old player that has spent one season in the Champions League, where Borussia Dortmund forward made a fool out of him.

Last season in the Europa League, Carlos gave away penalties against Wolves and Manchester United, as well as Inter Milan in the Final – so he does have an erratic trait to him that Sanchez shares, so it doesn’t seem like a huge upgrade.

Interested in Sanchez 😂😂😂 for what reason would they be interested? Along with Davies he’s one of the worst defenders in the premier league! He try’s hard but he’d be at home in league 1

Carlos is reckless.we have enough of those type of defenders already

But, mistakes do come far less for Carlos and he does consistently seem confident and assured in one of the best La Liga’s defences, and having made 37 appearances for his team in all competitions, he has been one of the best performing defenders in the league this season.

Inter Milan defender Skriniar is still our first choice preference though, as the player has plenty of experience at the top level, is a couple years younger and will likely be cheaper too – so it’s a no brainer for us even though it’s unlikely Inter will accept Sanchez to sweeten the deal like Sevilla would.