Opinion: Big-money Spurs move for Euro-based flop would be a shocking decision 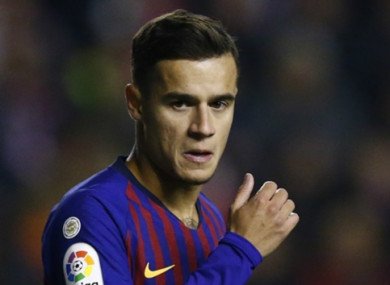 Congratulations to Philippe Coutinho, who already looks like he’s the frontrunner for 2019’s ‘Summer Transfer Saga of the Year’ award.

He’s been linked with a move away from Barcelona for the longest time possible, with Manchester United rumoured to be potential suitors. But according to South American football expert Phil Vickery, we could be a surprise destination for the Brazilian midfielder. And boy should we hope that isn’t the case.

Speaking to Sky Sports News (via Football.London), Vickery revealed: “The most logical place for him to come, surely, would be the Premier League. He did very well at Liverpool, and remember that relationship he had with Pochettino at Espanyol. Is there a little light flashing there?”

The links are understandable, with Coutinho enjoying a fine half-season under Pochettino’s guidance in La Liga. In his 16 appearances in the league during the 2011/2012 season, the midfielder struck the back of the net five times. Such was the impression that he left on the Argentine, that when Pochettino took over the reins at Southampton the following year, he tried to sign him for the south coast outfit, but missed out on his signing to Liverpool.

The Brazilian’s talent is undeniable. On his day he can be unplayable, either with his incredible vision and technique or with a fine long-range strike. He can be a game-changer.

But there are serious question marks over his attitude, particularly at the way he engineered a move away from Anfield last year. And since then, he’s had trouble adapting to Barcelona and, despite Neymar leaving the Camp Nou, has really struggled to fit in at all.

Pochettino has built a side here that’s always hungry, always improving, and always playing for the team. Coutinho’s arrival as a bit of a maverick and individual talent may just upset that balance. Indeed, not only could it cause feathers to ruffle on the pitch, the seismic wages he’s likely to demand could have a knock-on effect on some of our other stars.

It’s no secret that Daniel Levy has towed a hard-line when it comes to our salary structure, and shattering that barrier for someone like Coutinho would make little business sense. Players like Harry Kane, Dele Alli and Heung-Min Son could all feel rightly aggrieved and ask for more themselves, and in the end it would just be a vicious cycle in which we would struggle to escape from.

The £53m bid for Giovani Lo Celso showed the world we’re ready to flex our financial muscle. But even with our run to the Champions League final, trying to get a deal done for Coutinho where Barcelona are likely to demand well in excess of the £100m mark, would be a monumental disaster.

There are plenty of different areas where that money could be spent, and whilst the Brazilian would represent a huge blockbuster signing that would make the world sit up and take notice, we’ve had our greatest success in recent years in being shrewd in the transfer market. And a big-money for an over-priced Coutinho, simply isn’t that.