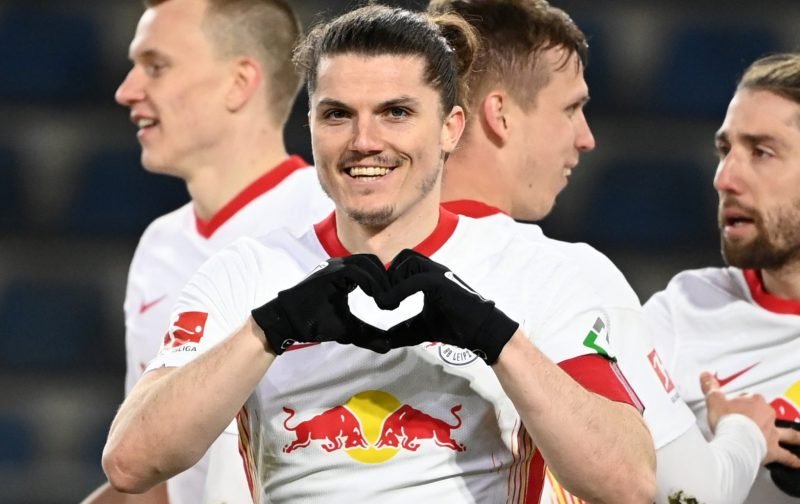 Since Christian Eriksen’s departure to Inter Milan last year, Spurs have found it difficult to replace him with another like-for-like playmaker.

Giovani Lo Celso has come in permanently, but while his performances have been encouraging, he has struggled with plenty of injuries during his time in North London so far, while Dele Alli and Erik Lamela haven’t exactly set the world alight in that position either.

The best players this season deployed in the attacking-midfield role have been Tanguy Ndombele and Lucas Moura – two players who prefer not to be playing in that position but elsewhere on the pitch, so it’s likely that the club could dip into the transfer market in the Summer.

Step forward Austrian midfielder Marcel Sabitzer, who is attracting interest from Manchester United and Liverpool, but Bild still believe that Spurs is his most likely destination should he leave at the end of the season.

RB Leipzig want around €42 million for him, but with just over 12 months remaining on the former Admira Wacker and Rapid Vienna star’s contract, it would be daft to assume that Daniel Levy will not be confident he can negotiate the price tag down.

Lamela, Alli and Moura could all be on the transfer list too with Spurs looking to raise funds by shifting on players deemed surplus to requirements.

Would be a great signing. But we need to sell to buy. By the time Levy haggles over an extra million for one of our players, Sabitzer would’ve signed for someone else

The 27-year-old would be a welcome addition to the squad as he brings plenty of creativity into the midfield and versatility too, as he can play anywhere down the middle from defensive-midfield to striker as well as on the wings.

His preference t0 play the ball on the ground and move it around fast will suit his potential midfield partner Tanguy Ndombele who often visibly gets frustrated when he receives the ball in the air as he has all the skill in the world at his feet to get by his opponent.

Sabitzer has scored six goals in the Bundesliga this season in 18 starts for the club as well as setting up two goals too, an impressive return for a player who has spent the majority of the season playing a much deeper role than what we would expect.

MARCEL SABITZER WHAT A GOAL! 😳 pic.twitter.com/b0TzqEw3au

This Marcel Sabitzer BEAUTY was scored on this day in 2019.

Wait for the reverse angle 🤤

One of THE best Champions League goals of recent years.pic.twitter.com/UnpPK5zhVt

His arrival could also put pressure on Pierre-Emile Hojbjerg and Oliver Skipp, as many fans suggested that both players would start for the club together next season, but should Sabitzer sign and be deployed centrally, either one of the defensive midfielders may be dropped.

The only way Hojbjerg, Skipp, Ndombele and Sabitzer could all start together is if the Austrian were to be deployed on the right wing, a role he has started in just once this season and finished with a 6.69 match rating, making it his weakest position that he has played in this season.