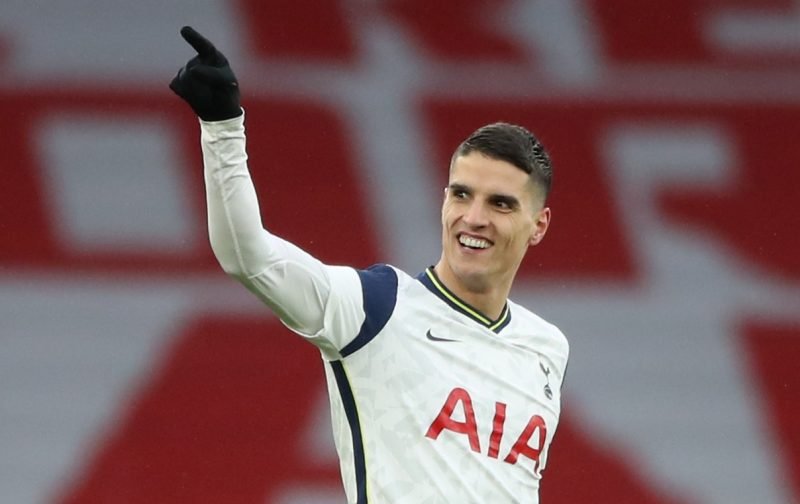 While it’s fair to say there aren’t many players who fight for the badge more than Erik Lamela, it’s also fair to say his Tottenham career has been underwhelming.

After playing 171 Premier League games for Spurs, the Argentinean winger has just 17 league goals – two more than he managed in just one season while at Roma which was the season that ultimately persuaded Daniel Levy to bring him to North London.

After scoring a ‘Rabona’ for the second time in his Spurs career against Arsenal in the North London Derby and also getting a red card in the same game on his 250th appearance for the club, Italian club Bologna have emerged as contenders to sign him.

Here's a detailed look at his outrageous goal in the north London derby from all angles…⬇ pic.twitter.com/raOYe4eUrL

Like Lamela, Bologna’s star man Riccardo Orsolini is a left-footed inside forward who is incredibly skilful and tries dribbling, making passes or shots with flair whenever he can – making the Spurs man a like-for-like replacement.

The seven time Serie A champions Sporting Director Walter Sabatini has said they are considering Lamela as a transfer target should their star man leave, with the likes of AC Milan interested.

“Lamela is one of the names we are looking into,” said Sabatini.

“We are trying to understand if there are possibilities to get there and there is no guarantee.

“Of course, should Orsolini leave, there would be no better substitute. We will see.”

Lamela also has 23 Premier League assists in total to his name, but again, this number just isn’t good enough especially when Harry Kane is on 13 for the season.

It will be difficult for Levy to recoup the £30 million that was paid for him back in 2013, particularly with the tricky winger turning 29 earlier this month, and with a history of injury problems – the opportunity to sell him may just be a once in a lifetime chance to get a fair sum.

With Bale likely not returning at the end of the season, funds will needed to be raised to replace him, and with Lamela also potentially leaving, new signings in the right-wing position may be inevitable for Spurs.

Played in more than half of Tottenham’s Premier League matches this season and being looked at by a mid table Serie A side. Yet the club tries to sell the idea of a top quality squad #spursy

Bologna have the money for Lamela? How on earth are we going to recoup the cost of buying him for £30 million 8 years ago. They are negotiating with Levy

20 million and he's yours

Binks, 19, is said to be a huge part of the Italian club’s plans when he returns from his loan back in Montreal, alongside former Hearts wonderkid Aaron Hickey, who has already featured in the Serie A this season.