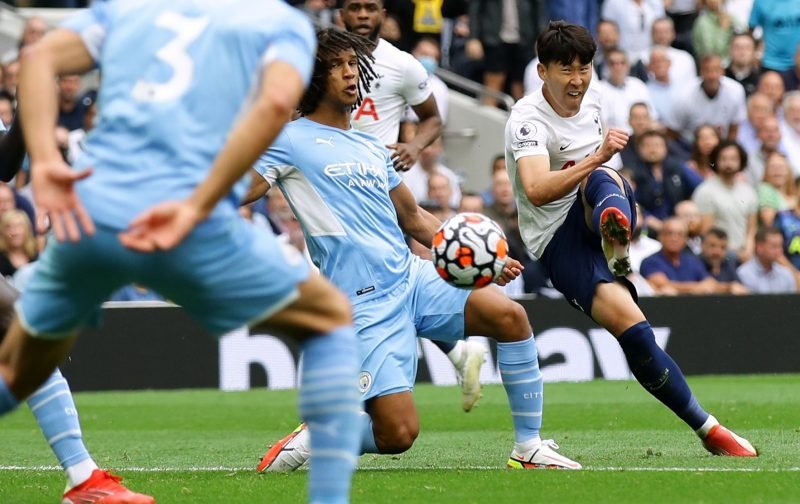 Spurs‘ victory at home to Manchester City yesterday was a statement of intent from new boss Nuno Espirito Santo and his team who physically dominated Pep Guardiola’s star-studded line-up all game.

A stunning finish from Heung-min Son was enough to secure the win, as he cut inside Nathan Ake and finished into the far corner past Ederson.

Despite the narrow margin of the scoreline, the truth is Spurs could have easily had at least two more, but the most important takeaway is the three points from the Premier League Champions. Here is our player ratings.

Almost made a calamitous error in the opening minutes when he came out to claim a corner but got nowhere near the ball and Fernandinho couldn’t direct his header into an empty net. Bounced back to make some solid saves including his stop from Jack Grealish late on. Organised the backline well and his distribution was solid.

Superb performance from the 22-year-old, continuing on from his impressive display against Arsenal in pre-season last week. Dealt with Raheem Sterling and Grealish extremely well and look unbeatable in one-on-one situations. Offered himself in attacking situations too. Man of the match.

Encouraging display from everyones favourite (or least favourite) erratic defender. Nuno looks like he is trying to get the best out of Sanchez, who has also added the long diagonal ball to his locker over the summer and displayed that again today. Some marvellous tackling and blocks, but did almost get caught out by Grealish late on.

Another encouraging performance from a defender who frustrates Spurs fans most of the time. Made some crucial blocks and looked calm, confident and composed when in possession. Played more risky forward passes into Dele, Hojbjerg and Skipp to get the side on the front foot and avoid the City press.

Solid performance from the Spaniard who marked Riyad Mahrez out of the game and didn’t even give him a sniff. When Ferran Torres came over to Reggie’s flank, he also couldn’t get past his compatriot, who looked extremely sharp and quick too. Didn’t have as much to do as the other three defenders.

Bergwijn, Son & Lucas held an extremely narrow line in between City's defense & midfield giving the CBs no option but to feed their full-backs.

The presence of Hojbjerg, Alli & Skipp in the next block of three prevented Gundogan & Fernandinho from getting possession centrally. pic.twitter.com/nFv0yIx98R

Made Sterling look like a Sunday league footballer on a couple of occasions, dispossessing him on the edge of the Spurs box on a couple of occasions when the attack looked dangerous – but the Dane made it look easy. Confident and composed all game and demonstrated his ability in transition to get the team on the counter attack.

A nervy start from the academy graduate, but he soon grew into the game and didn’t shy away from a challenge or a risky pass. Was going to be a 7.5, but his tackle on Fernandinho in the last few moments took his rating to an eight – I have been watching it all day and it still isn’t boring.

A brilliant performance from a player who is really under pressure from not only the fans, but Nuno and himself too to have a good season. Settled into the game after Mahrez sent him flying with a dummy, but he soon got his own-back on the Algerian by hounding him and dispossessing him. Also made brilliant interceptions and tackles high up the pitch to get Spurs going. Ran the most out of any player on the pitch.

The Brazilian has continued his form he has shown in pre-season straight into the start of the season as he terrorised City all game with his lighting quick pace and agility. Helped create the goal by expertly flicking the ball over his own head into the path of Bergwijn to get the team away on the counter.

The question before the game was, will Son be able to fill Kane’s shoes? The answer was an excellent winning goal from the Korean, and a very good performance all-round as he constantly pressured Ruben Dias and Nathan Ake. Had three big chances before his goal which he should have done better with.

An assist for the Dutchman to get his season started in the right way and give him confidence. However that confidence was definitely knocked a little after missing a huge chance minutes after Son’s goal as he went one-on-one with Ederson but could only find the side netting. Ran plenty and looked lightning quick on the counter-attack.

Did his job coming off the bench to waste time. Made some excellent challenges and kept possession fantastically during his limited time on the pitch.

Came on for Tanganga late on.

Came on for his debut late on.