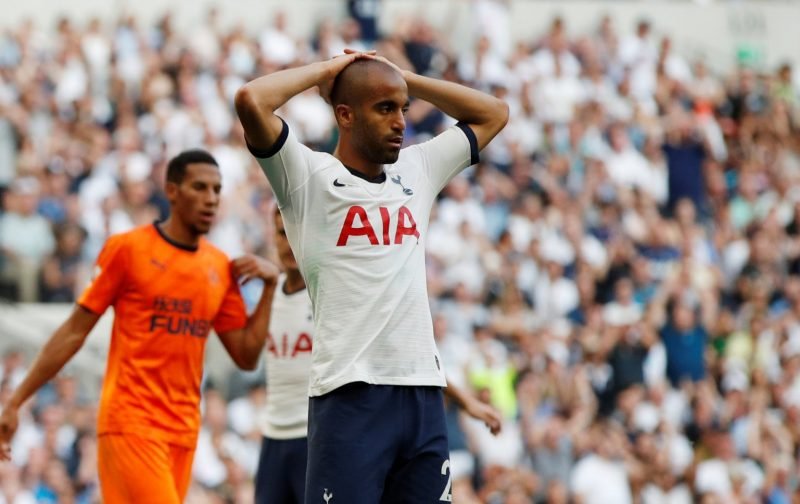 With Tottenham Hotspur fans being able to take some small positives from the performance against Liverpool last weekend, those little improvements haven’t actually done a lot to lift the disappointment and frustration in the fanbase given our struggles so far in the 2019/20 campaign and a recent interview by Lucas Moura certainly got tongues wagging as he claimed that – despite all the speculation – no one at the club had actually asked to leave over the summer.

Speaking to Football London following the weekend’s defeat, Moura addressed a few questions covering the atmosphere and spirit within the dressing room, and also spoke about the speculation linking him, and others, with a move away from the club during the summer transfer window.

Tottenham Hotspur’s Lucas Moura insists not one player in the Spurs dressing-room expressed a desire to leave the club:

“I know nothing was leaked in the locker room, nobody said anything about wanting to leave. The atmosphere is very good.”#THFC #COYShttps://t.co/bsqxHUrRYY

Given how lively the rumour mill was, and still is in many ways about potential departures and contracts running out for key players, plenty of fans simply didn’t believe that Moura was being entirely truthful in his answer.

Why would a player announce to his team mates that they want to leave, it doesn’t work like that.
Actions speak louder than words like not signing new contracts and downing tools.

Clive Allen said something similar. Said the players are happy. All very odd.

If u continue to frustrate Lucas, he will leave very soon… !

Lies. Eriksen told the media, I’ll send the article to Lucas. Bless him.

Don't buy one bit. No way Erikson had such a drop off so fast. Also Aurier wanted a move. Rose for me isn't a lack of motivation but rather the fact he is past it.

The Spurs communication Director, when Lucas gave this interview: pic.twitter.com/u2QanQZTV2