World class striker could partner Kane up top next season 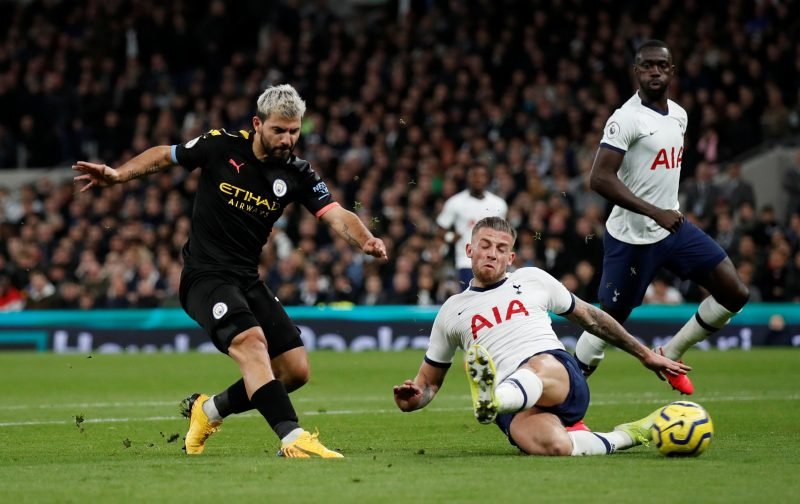 How often does an opportunity arise where two of the world’s leading strikers can play next to each other at the same time?

In recent years, Luis Suarez has played up top with Lionel Messi, Cristiano Ronaldo has featured alongside Paulo Dybala, Karim Benzema and Gonzalo Higuain and currently Thomas Muller is playing just behind Robert Lewandowski in one of the world’s most deadly attacks at Bayern Munich.

Spurs also have one of the best deadly duos in the world, as Harry Kane and Heung-min Son have scored a combined 47 goals in all competitions for Spurs this season and have also broken the record for the partnership that have assisted each other the most in the Premier League in one season.

That sensational duo could now become a trio, pushing Son out wide and potentially dropping Kane a little further behind the striker role, as Manchester City legend Sergio Aguero is linked with a free transfer to Spurs at the end of the season when his contract expires.

We're not good enough to turn our noses up at potentially getting Sergio Aguero on a free. Just saying.

The arrogance is insane
Imagine Aguero and Kane on a pitch together yeah I wouldn't complain https://t.co/RdrwO0XKWo

Kane and Aguero would be unreal and it would allow Kane to drop back into a 10 position at times.

Aguero, 32, still has plenty of years left in him and despite previous reports suggesting he wants to move to Europe, it has now been reported that the Argentine would be keen on remaining in England and proving himself for a few more years in the best league in the world.

The striker has just one goal this season in the Premier League, but has been struck with a few different injuries over the course of the season, and that is most definitely not a reflection of his current ability, as this is the first year he has not scored 16 or more goals since the 2012-13 season.

Arsenal and Chelsea are also reportedly interested as Aguero is apparently not too bothered whether or not his future club will be playing in the Champions League or not, but a move to Spurs just makes more sense than a move to one of our rivals.

The Blues have splashed the cash on Timo Werner as well as Kai Havertz and Hakim Ziyech in their forward positions already this season, while they already have homegrown talent Callum Hudson-Odoi, Mason Mount and Tammy Abraham good enough for more first team action and the likes of Olivier Giroud, Christian Pulisic and Michy Batshuayi still on their books, albeit with Giroud’s contract expiring at the end of the season and Batshuayi out on loan.

Meanwhile, Arsenal can’t really afford to take a gamble on a 32-year-old who is one year older than out-of-form striker Pierre Aubameyang, who will cost a large amount in wages per week when they are likely to miss out on Europa League football and have already spent a gargantuan amount on the likes of Nicolas Pepe, Thomas Partey, William Saliba, Lucas Torreira, Alexandre Lacazette and Aubameyang in recent seasons, but are still consistently failing to get Champions League football.

Spurs can accommodate Aguero in the starting line-up, as Son could be pushed out wide, Kane could drop a little deeper and someone like Lucas Moura or potentially even Ryan Sessegnon could be deployed on the opposite flank next season.

👑 Most Kings of the Gameweek appearances 👑

The experienced striker will also be competing with Kane to score more goals than him, as the England captain closes in on his Premier League goal tally, so the healthy competition between the pair could help lengthen Aguero’s career and also take Spurs to the next level.

It makes a lot more sense to bring in the Man City star as opposed to sign Carlos Vinicius on a permanent deal, as while neither striker would likely remain at the club for a long time, Aguero is a free transfer and will bring an abundance of experience to the squad, which would help the likes of Troy Parrott and Dane Scarlett in the long haul.

If these links are true, and Spurs are indeed interested, Jose Mourinho and Daniel Levy must make signing the 32-year-old a priority.