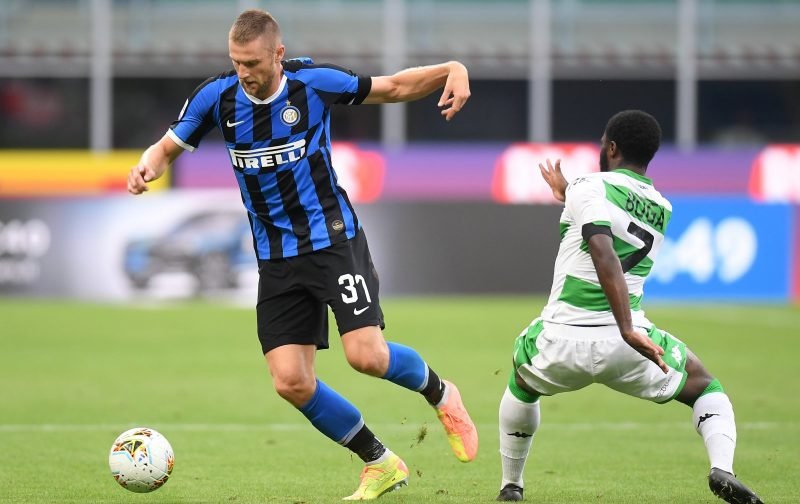 According to FC Inter News, Tottenham have identified Milan Skriniar as a replacement for Jan Vertonghen. The 33-year-old left Spurs after his contract expired this summer and agreed a three-year deal with Benfica, forcing Jose Moutinho to scour the transfer market for a replacement. Skriniar would improve our defence, but FC Inter News say he won’t come cheap.

Yes, but it’s complicated. The 25-year-old joined Inter Milan from Sampdoria for £30.6m in 2017 and has gone on to make 128 appearances in all competitions, scoring four goals with four assists. Skriniar has been inconsistent last season, however, being dribbled past 19 times in 32 Serie A games and giving away 52 fouls.

The Slovakian international completed 92.1% of his 1998 passes, winning 38/74 aerial duels, blocking 23 shots/crosses/passes, making 83 clearances and averaging a tackle (39) or interception (28) every 39 minutes. He has some qualities but looked rather ordinary in 2019/20. FC Inter News say Antonio Conte is happy to offload the centre-back and Tottenham could oblige.

The deal comes with a catch, however.

Skriniar is valued at €50m, but we may not need to pay to sign him. FC Inter News mention that Inter are keen on Tanguy Ndombele this summer, so a deal that sees the two players swap clubs could be on the cards. We don’t have lucrative funds to sign new recruits, resulting in Danny Rose, Juan Foyth, Cameron Carter-Vickers, Moussa Sissoko and Serge Aurier being put up for sale, so part-exchange deals might be a smart way of building the squad.

We’ve already traded Kyle Walker-Peters and Pierre-Emile Hojbjerg, although both deals were completed separately, so another player-swap could be mooted. Skriniar and Dembele are valued at €50m, so no money needs to be involved. Whether a deal gets over the line remains to be seen, however, as we still want to keep Ndombele despite his disappointing debut season and Inter may prefer a centre-back coming in the opposite direction.

Mourinho has Toby Alderweireld, Davinson Sanchez, Japhet Tanganga, Eric Dier and Juan Foyth at his disposal, but he’ll want another established centre-back to replace Vertonghen. The Tottenham manager doesn’t appear keen on Ndombele based on how little he played him last season, so Inter might have luck bringing him in.

In other news, Newcastle have withdrawn their interest in an out-of-favour Tottenham defender