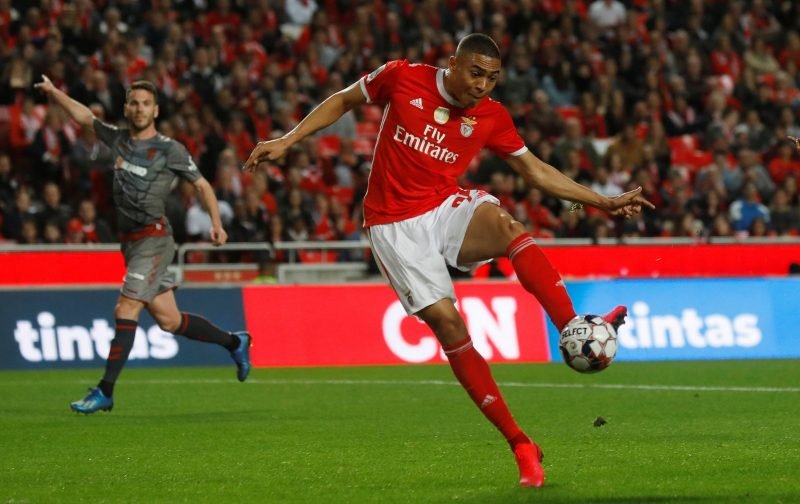 According to TVI24, Tottenham are interested in Carlos Vinicius and may have to battle two unnamed English clubs for his signature.

Liverpool and Wolverhampton Wanderers have been linked with the 25-year-old in the past, but the report doesn’t say if they’re among the trio of English sides to have made an enquiry.

Vinicius is coming off the back of an outstanding debut season at Benfica, but he won’t be granted a departure unless his lofty asking price is met.

How good is Vinicius?

Last season, the 25-year-old averaged a goal/assist every 77 minutes in Liga NOS, created 22 chances, had 66 shots with 42% hitting the target, made 18/29 successful dribbles, won 29/53 aerial duels, won 17 freekicks and made 11 tackles. It’s no surprise that clubs are showing an interest, but Vinicius won’t come cheap.

Benfica paid £15.3m to sign Vincius last season and Transfermarkt say his market value has risen to £18m, but TVI24 believe Benfica are now holding out for €60m (£55.5m).

It’s worth noting that president Luis Filipe Vieira slapped a €100m (£92.6m) asking price on Vinicius months ago amid interest from Liverpool and Wolves, so it remains to be seen if they’d even accept any lower.

Chances of us signing him?

Pretty slim. We have to be thrifty in the transfer market this summer and are generating funds for new arrivals by selling existing players, so I can’t see how we’re going to raise enough money to procure Vinicius’ signature.

There’s no doubt the 25-year-old would improve our squad and boost our chances of finishing in the top-four while being an excellent replacement for Harry Kane in case of injury or a surprise sale, but he’s far too pricey.

Sadly, we may have to turn our attentions elsewhere.

In other news, Villarreal are interested in Juan Foyth as Jose Mourinho has final say on a transfer