Ben Davies posted an injury update on his Instagram account, revealing that he’ll return to training early to continue his rehabilitation at Hotspur Way. The Tottenham defender recently had surgery on a hernia and should return to full fitness during pre-season. 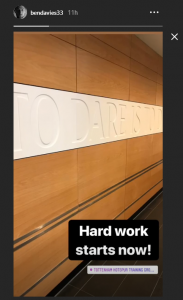 Spurs have four games to come next month. They’ll lock horns with Juventus on July 21 (in Singapore) and Manchester United (in Shanghai) on July 25 in the International Champions Cup. In the Audi Cup, they’ll face Real Madrid (in Germany) on July 30 and an opponent yet-to-be-named on July 31 (also in Germany).

Davies made 40 appearances in all competitions last season and delayed his surgery to make the squad for June’s Champions League final with Liverpool. He also put off the operation so he could feature for Wales in their Nations League meetings with Croatia (June 8) and Hungary (June 11). The operation was a success and he’s now working hard to be 100% for July.

The 26-year-old could be an important player for Mauricio Pochettino next season amid uncertainty over Danny Rose’s future. Davies may also be required to play centre-back at times as Tottenham are short on central defenders and could lose Toby Alderweireld this summer.