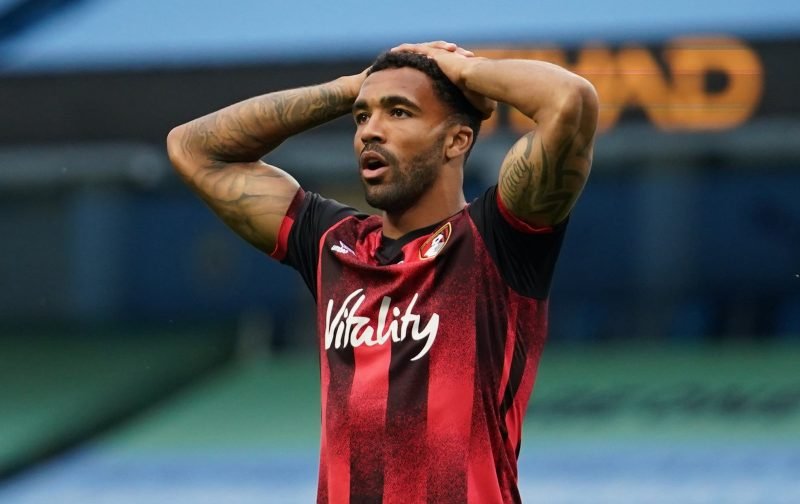 According to the Football Insider, Jose Mourinho has contacted Callum Wilson over a potential move to Tottenham. The 28-year-old is expected to leave Bournemouth after their relegation from the Premier League and has the likes of Spurs, Everton, West Ham United and Crystal Palace showing interest.

He appears willing. Football Insider say Wilson is open to joining us as backup to Harry Kane, so that leaves us with the task of negotiating a fee with Bournemouth and hashing out personal terms with the England international.

We’ve been linked with Troy Deeney, Vedat Muriqi, Patrik Shick, Arkadiusz Milik, Robin Quaison and Habib Diallo among other strikers, but it’s been difficult finding someone that would improve our squad who is also content to play a secondary role.

Wilson had a hand in 57 goals from 126 Premier League games, so he’s been a reliable goal-getter and creator. He’s only hit double figures once in five top-flight seasons, however, so could Tottenham want somebody more prolific?

How much would he cost us?

Wilson has a £30m asking price and takes home £60k-per-week/£3.12m-a-year. The England international has three years remaining on his deal at Bournemouth, so Tottenham could end up paying a total of £39.36m to procure his services until 2023.

Danny Rose, Serge Aurier, Juan Foyth and Cameron Carter-Vickers are among those expected to be sold to generate funds for new arrivals this summer. The Covid-19 pandemic has depleted our revenue while the stadium repayment costs has eaten up a lot of our resources, so it remains to be seen how much money we have in the kitty for Wilson.

Our first piece of transfer activity saw us sign Pierre-Emile Hojbjerg from Southampton for £15m at the same time Kyle Walker-Peters moved in the opposite direction for £12m. And we’ve recently replaced Michel Vorm with Joe Hart on a free transfer. He’s only earning £27.5k-per-week in North London, so it’s clear that we’re being thrifty in the market.

Wilson is a good player with a respectable record at Bournemouth (41 goals in 126 Premier League games), but there may be better value out there. If we’re limiting our spending this summer, is it really wise to spend nearly £40m on a 28-year-old striker who seldom hits double figures for league goals in a season?

In other news, Tottenham have identified a €15m-€20m replacement for Tanguy Ndombele