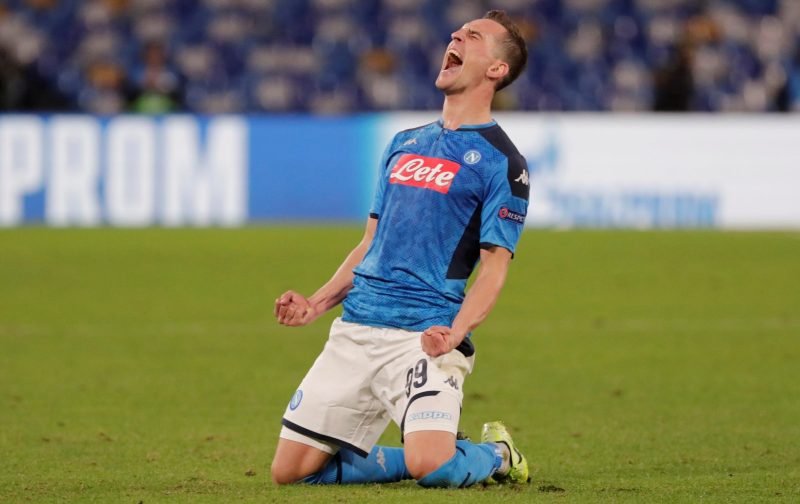 According to Gazetta dello Sport, Tottenham are ‘ready to invest’ in Arkadiusz Milik and may have to battle Juventus to procure his signature. The Serie A outfit are also showing ‘interest’ in the 26-year-old, but Gazetta dello Sport say Milik’s asking price may prove a stumbling block.

Why would Napoli sell him?

Milik has made 122 appearances in all competitions since joining Napoli from Ajax in 2017 and has been a regular under Gennaro Gattuso this season with 35 appearances and 14 goals, but his future at the Stadio San Paolo is uncertain.

Gazetta dello Sport say Milik has rejected a lucrative new deal at Napoli which has irked president Aurelio De Laurentiis to the point where he’s threatened to drop the striker next season. Milik is also in the last year of his deal, so Napoli will have to cash in this summer rather than risk losing him for nothing in 2021.

How much do Napoli want for Milik?

Napoli spent £28.8m on Milik four years ago and are now requesting €40m. De Laurentiis may have to lower his demands by 25%, however, as Tottenham and Juventus don’t appear to be budging. As for wage demands, the Polish international earns €48k-per-week/€2.5m-a-year at Napoli and turned down a €77k-per-week/€4m-a-year extension, so we may have to pay a tidy sum.

Finances are tight due to the Covid-19 pandemic, so a move for Milik may depend on how much money we can raise through the sale of existing players – Serge Aurier, Danny Rose, Juan Foyth, Cameron Carter-Vickers and Moussa Sissoko are reportedly expendable.

What’s the likelihood of us signing him?

It’s hard to gauge. Laurentiis has been public about his desire to sell Milik this summer, but his asking price may be too steep for us. Juventus’ interest may also be a problem too, as the Old Lady will be a more attractive proposition given their success in Serie A.

Milik would certainly improve our attack, but we may need to sell one or two players before a €40m signing is feasible. The 26-year-old’s expiring contract means Napoli need to find a buyer in this transfer window, so that could lower his asking price if offers don’t come. Time will tell.

In other news, Tottenham are considering selling two players to fund the move of a right-back