Tottenham: Football Is A Game Of Two Teams 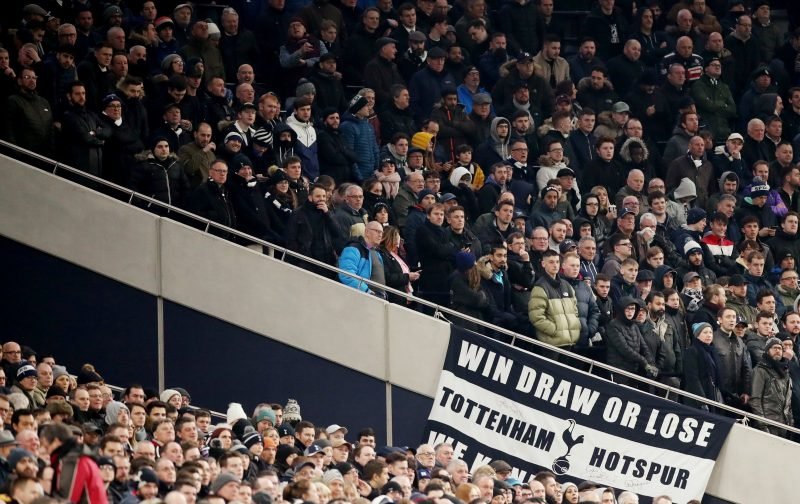 It’s pretty obvious really …. football is a game of two teams. It is not logical to expect that the team we support will have everything its own way.

Spurs have dropped points against teams where all supporters expected a win. This often leads to frustration, even anger, from many supporters. But, despite this, we sit in second place on the table, above such fancied clubs such as City, United, Chelsea, and Arsenal (although, to be honest, I’ve never fancied Arsenal).

A mid-table or bottom club can take points from a top club …. on any given day. This happens more and more as many teams decide it is better to play defensively and get a point rather than play to win and end up with nothing. it’s a practical theory, and it works. We see that every week.

But many teams also realise that by sitting back and defending they could steal a win from a fast break. We see that most weeks as well. Every PL team has at least one or two players that are above average. They can turn any game, and they sometimes do. That is the way the PL will play out in future years. That is why predicting results can be so difficult.

Some supporters seem to see this as a problem that only Spurs have. This isn’t true. Supporters, generally, fail to give credit to the opposing team when they win or force a draw. We are more prone to pick faults with our own team. To demonise the team or the manager because of a poor result does not make sense because …. there are two teams on the park. To demonise the team or the manager after a series of poor results is a different matter.

The reality is that every top team will lose points they should not, on paper, lose. We beat Brighton but could have easily lost as they missed three completely open goals that ‘Arry’s missus’ would have scored (she was some kind of player)! Sometimes teams play well and lose. Sometimes teams play badly and win. It’s the unpredictability and competitiveness of the PL that makes it the most exciting competition in world football. How lucky are we to be in the mix.

If I’m not mistaken I think we all agreed that the recent Transfer Window was a great success and we now have (arguably) two players for every position. Given the amount of games on the horizon that was crucial for the rest of the season. It’s also pretty obvious that team rotation is a significant aspect of the game for the clubs fighting on many fronts. Clubs like Spurs.

This is where the manager, any manager, needs to make the right decisions. But those ‘right decisions’ are not easy to make. A manager has to ‘mix and match’ his players for specific games. He bases his decisions on what he sees at training. He expects that his players will perform at their optimum level when he picks them. But sometimes they don’t. That is not the manager’s fault although he often gets the blame.

When to use the bench during a game is a decision managers will, in hindsight, be vilified or praised for. But it’s a fine line of distinction. Again, many supporters are quick to demonise a manager when things don’t go as expected (or desired). Even during a live match thread, many supporters start calling for heads before the match is over. What is that about? How does it help …. especially when we often go on and win the game in any case. What those supporters forget is …. there are two teams on the park! The other thing to remember is that it is not the manager’s fault every time a player does not perform.

Most league games so far this season have been against lower clubs who elected to defend. Those games were often a struggle. But we sit in second place. We have only played one match against a perceived major rival … a team intent on attacking. It was away from home. How did that turn out!

Spurs cannot play the same way against every team because those other teams will play differently. There are two teams on the park. We will play much differently against United, Arsenal, Chelsea, City, etc, than against, Fulham, WBA, Brighton, etc. As supporters we can provide a better service to our club by recognising, and accepting, how modern day PL football works. Knee-jerk reactions aimed against team members or the manager are far from helpful or supportive. Of course, it might be a different story if Spurs were in the bottom six instead of the top six.

But we are second and will remain there until our next game against Manchester City at home …. a game that will see two attacking teams on the park! Whatever happens, it’s worth remembering that one game does not define a season. Gotta love football!

204 Replies to “Tottenham: Football Is A Game Of Two Teams”