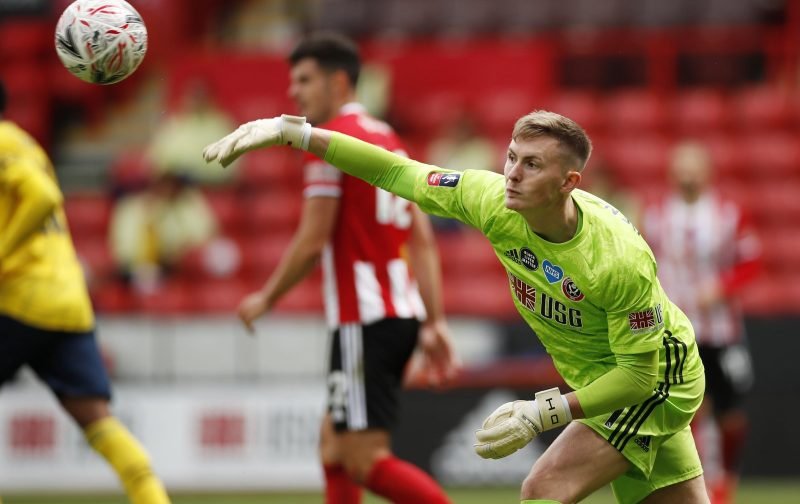 Mourinho is eager to use the summer transfer market as a chance to add competition between the sticks for Hugo Lloris and has identified Henderson as a potential candidate that can challenge the Frenchman in north London.

Henderson has worked with Mourinho previously during the Portuguese tactician’s time at Old Trafford but was never awarded an appearance, with his only involvement in a matchday squad being as an unused substitute during an EFL Cup tie with Blackburn Rovers.

The 23-year-old superstar shot-stopper has since gone on to find his feet in the Premier League during a very successful loan spell with Sheffield United, leaving Manchester United boss Ole Gunnar Solskjaer with a headache going into next season.

Manchester United are looking to secure Henderson’s future with a new, long-term contract but face having to convince the Whitehaven-born ‘keeper to put pen to paper as the Red Devils product does not want to see his development slow down by becoming the number two to David de Gea.

Solskjaer is expected to persist with the Spaniard as his first choice next term, which Chelsea are keen to capitalise on with Henderson out of contract in 2021.

The Blues are themselves looking to replace their first-choice having grown disappointed with Kepa Arrizabalaga’s performances and could offer Manchester United €60million (£54m) to poach Henderson, should the ‘keeper not extend his contract.

Plenty of Spurs fans would love to see Daniel Levy step in and beat Chelsea to the punch by signing Henderson, who they feel would be a ‘great signing’ after recording the Premier League’s third-most clean sheets (13), sixth-most punches (16), ninth-most saves (97) and 12th-most high claims (16) and successful runs-out (eight), per Sofa Score data.

I love lloris but this would be worth it https://t.co/NvTWjpztaC

This would be a great signing

Ja I like this boy, wouldn’t be a bad addition. https://t.co/S9QQxw59QY

Very few Spurs fans believe Tottenham have a realistic chance of signing Henderson in the summer, however, given Spurs are expected to have a reduced transfer budget and that Manchester United are keen to secure the shot-stopper’s long-term future.

Given Henderson’s likely price tag, our limited finances, our numerous pressing outfield needs, and the fact that Lloris was very good after the re-start…. I give this rumor about a 2 out of 10 on the reality scale.

As if that would happen :/
He has been too crucial for #SHU and he seems like the heir to De Gea, so if we buy him, it’s best if he send him out on a loan because he could be a good heir to Lloris too https://t.co/Xljca4DMnz

There are also a few Tottenham supporters who would not pursue Henderson during the summer as they believe Lloris is still the answer to their side’s problems, having impressed with his performances since recovering from a horrific dislocated elbow.

I like Lloris I think he is the best shot stopper in the league but Hederson is class and 10 years younger I dunno🤷‍♂️ https://t.co/LzY9lNdMRq

Anyone that thinks Lloris needs replacing needs to go give their head a wobble. As good as Henderson is I’d still rather have Hugo at this point. He was brilliant after he suffered that horrible injury.

Not as good as Loris and wouldn’t come as back up…not happening https://t.co/sMVf3vSpqJ