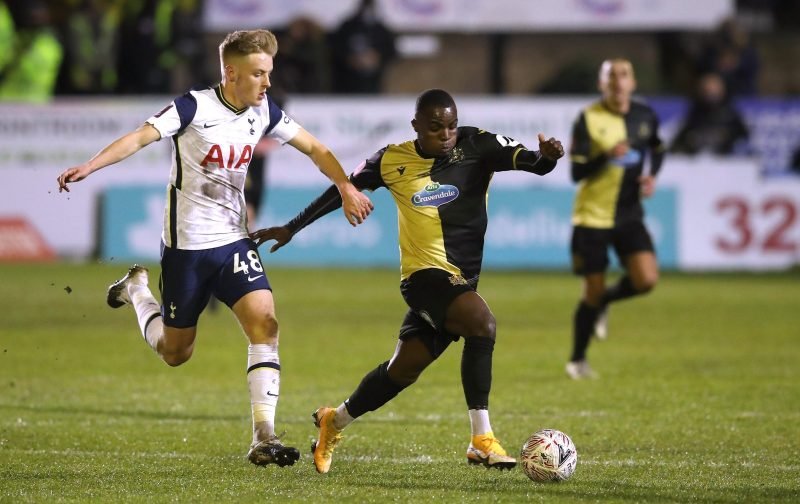 Young Spurs prospect Harvey White said he has loved the past season and has really progressed as a footballer following his loan spell at Portsmouth, which began in January.

After joining the League One side, White scored one goal and set up another, playing in 21 league games albeit with 16 coming from the bench, and while Spurs would have been hoping that he would have been trusted to play more, it seems as if Portsmouth recognised they made a mistake in not starting him more often as he played most of the final games of the season.

Before heading out on-loan, the young midfielder featured for the club in the Europa League before starting in the FA Cup against non-league side Marine.

“The games at Spurs definitely helped me in making a dream come true and then going on loan to Portsmouth, which is another massive club, getting the opportunity to play there and learning with some top players and top managers,” White told the official Spurs website.

That is a wonderful header from Harvey White. What a moment for him. pic.twitter.com/h29DkcwlBR

“I’ve just loved it. It’s been a massive learning curve – in a really positive way.

“As soon as I got to Portsmouth in January, on the first day, everyone made me feel welcome.

“I enjoyed training, we got to the first game against AFC Wimbledon, I played in it, we won 4-0 which always helps and then I pushed on from there, training every week, I was in the gym quite a bit and just playing a lot of football.

"I was just gutted that we didn’t get into the play-offs because that would have topped off a really good loan and got us closer to promotion." #Pompey https://t.co/xfbZ48zY58

“Compared to Development Squad games, it was a lot more competitive because you’re playing for people’s livelihoods – that was always in the back of my head – and you’re also playing for players’ careers because those players – and me as well – want to play at the top so if it means promotion, if it means play-offs, for some players, that might be the highest level they’ve played at so far.”

Portsmouth only just missed out on the play-offs to earn themselves a spot in the Championship for next season, but while the second tier isn’t the south coast club’s destination, it could be White’s next season should he earn himself a loan move to a team competing in the division.

“Going there and making 22 appearances, I started six of them, played three full lots of 90 minutes and scored one goal, so it was great for me, but I was just gutted that we didn’t get into the play-offs because that would have topped off a really good loan and got us closer to promotion,” said White.

“I was gutted in that respect because as a team, we deserved it. We went through a lot of injuries and suspensions, I feel like we did deserve to be in the play-offs but it wasn’t meant to be.

“I’m sure Portsmouth will get back to where they should be though – and that’s at the top.”

While White hasn’t necessarily hit the heights we were all hoping he would this season, he has showcased his skills now in the professional game and this season has been important for his development.

About 4/5 too bloated for a team only in the UEFA conference league.

Add in younger lads like Harvey White etc, and it’s way too big!

We hope next season that he can be used in the first team squad particularly with the UEFA Europa Conference League, but if not, a Championship move should definitely be on the cards for the set-piece specialist.