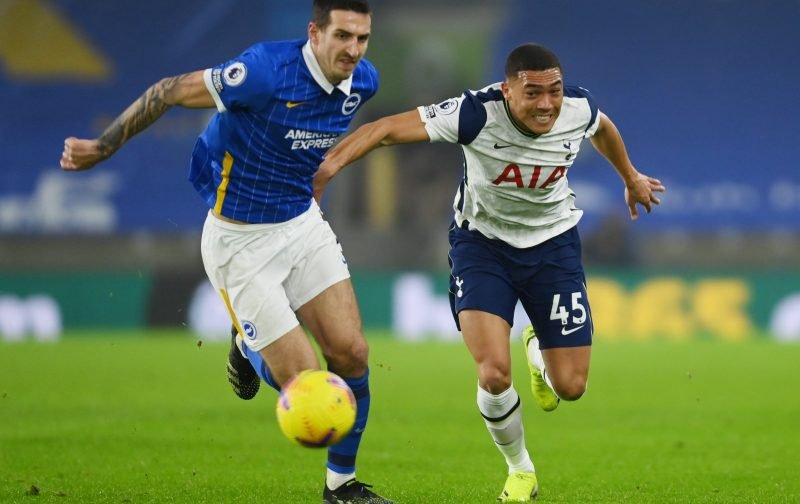 As the end of Carlos Vinicius’ loan approaches, it seems his PR department are advising him really well in ways to winning over Spurs fans as he bids to earn a permanent transfer to North London.

He recently appeared in a hilarious video with Lucas Moura where he learns how to speak English, and has also recently scored his first Premier League goal for the club.

idc what figure Vlahovic can't produce this type of content

Now, as his return to Benfica looms unless Spurs negotiate a permanent deal for the striker, the Brazilian has admitted that he could not turn down a move to the club and he simply had to join.

“When you get the chance to join Tottenham it is not something you say no to,” said Vinicius.

“As soon as they came in for me, I had to join this team, to be a part of this dressing-room with such wonderful players.

“I am learning every day.”

The striker’s story is a very sad one, as he lost his mother whilst trying to make his mark in the football world all while trying to take care of his wife and two young children.

"Whenever I scored a goal, she’d show it to the whole town. So now what’s the fun in scoring goals? She won’t be seeing it anymore."

Setbacks and heartbreak – to scoring in the Premier League.

Failed spells at Santos, Palmeiras, Napoli and Monaco seemed to have doomed the striker to an unfulfilled career full of regret, but after a fantastic year at Benfica last-season in what was essentially last-chance saloon for him, Vinicius now finds himself on the brink of joining a team who were Champions League runners-up just two years ago.

It’s a fantastic career turn-around from the striker who was actually on the verge of quitting the sport just a few years ago, as he has scored ten goals in 21 appearances in all competitions – with 12 of the games having had Vinicius come on from off the bench.

Last season, he scored 24 goals in 47 games in all competitions as he earned the Liga NOS golden boot too in what was his best season to date for any of his clubs, scoring just over one goal in every two games.

The transfer fee that Benfica want is around £38 million, but Daniel Levy is very reluctant to pay that for a player who has just turned 26 and likely won’t be anything more than a back-up for Harry Kane, as well as having to compete with the likes of Dane Scarlett and Troy Parrott in the next few seasons for his place on the team.

Should he join, its unlikely that the fee will be more than £20 million, and with other targets in mind like Matthew Hoppe of Schalke, it remains uncertain whether or not Vinicius will still be in North London next season.