According to the Evening Times (h/t The Sun), Tottenham are one of many clubs ‘keeping an eye’ on Joe Walsh – Manchester City, Everton and RB Leipzig are also monitoring his situation at Gillingham. The 17-year-old has made two appearances this season and has three years remaining on his deal at Priesfield Stadium. 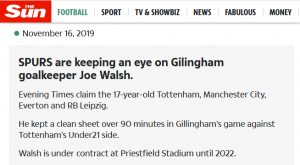 Walsh is second-choice between the sticks under Steve Evans. He’s been on the bench in 16 of Gillingham’s 18 League One games and has made the matchday squad in the EFL Cup & FA Cup too. Tottenham aren’t short of goalkeepers with Hugo Lloris, Paulo Gazzaniga and Michel Vorm in the first-team, but Walsh will be one for the future.

Do Tottenham need another young goalkeeper in the u23s? 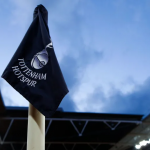 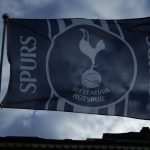 If he joined Spurs, the 17-year-old may not be content developing in the u23s. Walsh has been given first-team opportunities with Gillingham, so he may benefit from a loan move away over reserve team football. Tottenham already have Alfie Whiteman, Brandon Austin, Jonathan De Bie and Joshua Oluwayemi in the squad too, so they’re somewhat overstocked on ‘keepers.

Tottenham are yet to submit a formal offer for Walsh, but he’s a player on their radar.