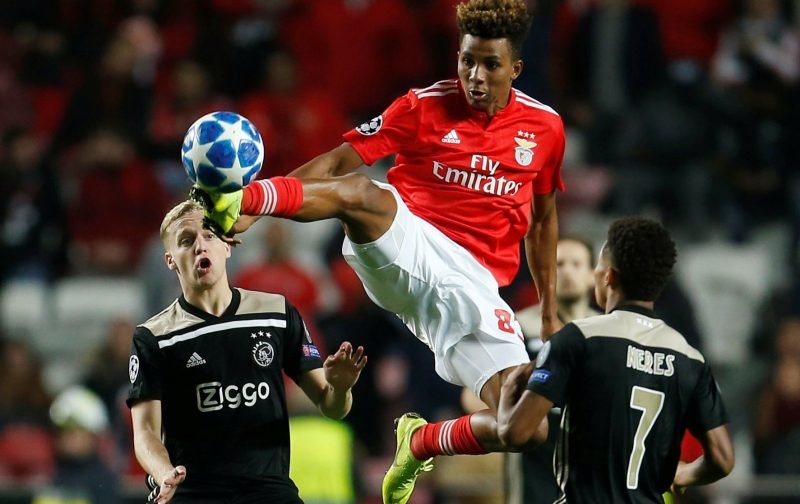 Tottenham are close to signing Benfica midfielder Gedson Fernandes on an 18-month loan deal, with Spurs having the option to make the signing a permanent one come 2021.

Sky Sports News report that the 21-year-old Portuguese youth international has decided to join Spurs over London rivals West Ham, with the report stating that the Irons were also heavily interested in the Liga NOS youngster.

The report also claims that Tottenham’s option to sign Fernandes on a permanent deal will cost the club £56m, exactly half of what the midfielder’s release clause at Benfica is with the Portuguese giants.

With the reigning Liga NOS champions signing Fernandes from his youth club at the age of 10 for just €250 (£215) and 25 footballs as reported by Four Four Two, Benfica stand to make a big profit on the 21-year-old prospect, and for Tottenham, they have managed to acquire a midfielder who can become of great use for Jose Mourinho.

As a scout report from Breaking The Lines shows, Fernandes is an extremely versatile midfielder who is capable of being deployed in multiple positions from the centre of the park to out on the wings, and his skill set allows the 21-year-old to flourish in most positions on the pitch.

And it is this ‘Jack of all trades, master of none’ set of skills that has made Fernandes such a prized asset this month amongst some of Europe’s biggest clubs, and for Tottenham and Mourinho, it makes the midfielder the ideal player to use as cover for injured midfielders, as well as a starting player, should the youngster hit the ground running.

Fernandes comes to Tottenham with a big reputation hanging over his head, but with Mourinho still trying to figure out his best Spurs XI, the Portuguese midfielder could find himself as a valuable player in the second half of this season.