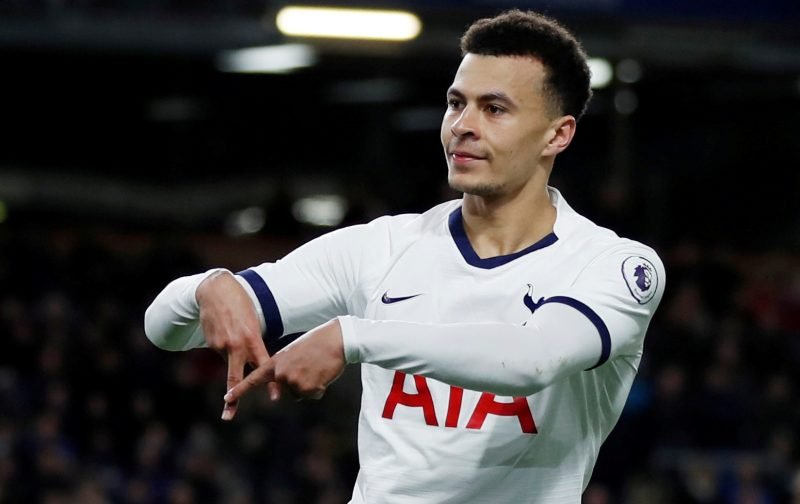 Like most Spurs supporters, I love Dele Alli. He’s ‘Our Alli’, after all. But if I’m being honest I love him more for the way he used to play when he first played at N17 than the way he has played for the last couple of years.

It would be easy to pick a performance during his time at Spurs that would highlight the good or the bad in Dele’s game. But I’m not interested in the odd performances …. just the consistency of his performances overall. After all, every team requires consistent performances from every player.

Dele’s consistency during the first two seasons of his career at The Lane soon made him ‘our Alli’. He was adored by the masses and his reward was fame and fortune. But a couple of seasons ago the wheels dropped off in terms of his consistency to perform. What happened?

Whatever happened there is no doubt his career took a different trajectory. He is no longer a focal part of the National squad and he has played a far less significant part in the Tottenham teams for some time. Both the national coaching team and the Tottenham coaching team recognised that something was wrong. It must be obvious to Spurs supporters that his consistency went walkabout.

Dele was a very young man when he became ‘the adored one’ at Tottenham. Did he handle this public adoration well? Media reports suggest his personal life may have become more important to him than his professional life. Tabloid photos of his outings with his girlfriend was splashed across newspaper pages. He seemed to be portrayed more as living the life of a rock star than the life of a professional football star. Was this just tabloid humbug or was there an element of truth?

We have all enjoyed his ‘tricks and flicks’. Dele can do unusual, cheeky, unexpected things with a football. It’s beautiful and entertaining to watch. Early on they used to work with regularity. Not so much now. Perhaps he should pay less attention to being tricky and more attention to playing basic team football. There are times in football matches when it’s best to keep it simple …. to pass to a team-mate rather than go for something more spectacular. The tricks and flicks would still be there, but used as a supportive skill to his game, not as the primary skill.

Spurs supporters have not seen such flair and sublime skills since Dimitar Berbatov graced our pitch. These skills are a part of Dele’s game and a part of who he is and how he likes to express himself. They should always be part of his game …. but just a part of it.

The reality is that Dele is no longer an integral part of the National squad and neither is he one of the first names on the Tottenham team sheet. But somewhere inside Dele Alli there remains a very good footballer who could be so much better than he currently is. Sometimes a question has to be asked, and someone has to ask it, so …. how does he show us that person as a Tottenham player?

35 Replies to “Regarding Bamidele Jermaine Alli”