Tottenham have been recently linked with a move for Kalvin Phillips, but they risk having a bloated squad if the £10k-per-week midfielder signs this summer. Mauricio Pochettino already has Eric Dier, Moussa Sissoko, Tanguy Ndombele, Victor Wanyama and Harry Winks at his disposal, so he may have to offload an existing player to make room for a new arrival. 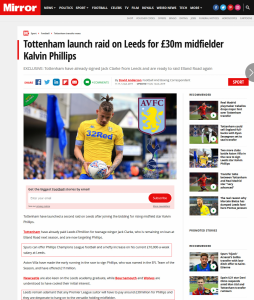 Phillips has made 141 appearances in all competitions for Leeds United, scoring and creating 18 goals. The 23-year-old has been a regular at Elland Road for three seasons and finds himself being linked with numerous Premier League clubs after impressing in the Championship.

Phillips would be a good addition to the Tottenham squad, but he might struggle for regular football due to the stiff competition for places. Daniel Levy might not want to part with £30m for a player that won’t be a regular next season, so other transfer targets should be made a priority.