Victor Wanyama should seek a move away from Tottenham in January as he’s out-of-favour under Mauricio Pochettino. The 28-year-old nearly joined Club Brugge last summer before making a U-turn on the decision, but he can’t stay in North London as he’s been on the periphery for two months.

The 28-year-old has made just three appearances in all competitions this season, racking up 113 minutes of playing time, and hasn’t featured for Spurs since September. Wanyama’s last appearance came in Tottenham’s EFL Cup defeat to Colchester United (September 24).

The Kenyan international finds himself behind Harry Winks, Giovani Lo Celso, Tanguy Ndombele, Dele Alli, Eric Dier, Moussa Sissoko in the pecking order and will have to leave if he wants more playing time. Tottenham wanted to sell Wanyama in August and nothing has changed in November. 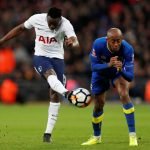 Pochettino has no place for the defensive-midfielder in his squad – leaving him out 11 times already –  so it’s hard to see anything other than Wanyama moving on in January. Since his 2016-move from Southampton, the 28-year-old has made 96 appearances for Tottenham and looks unlikely to add to the tally.