Juan Foyth picked up an injury for Tottenham against Bayern in the Audi Cup on Wednesday and could be out of action for some time. The 21-year-old received treatment on his ankle and eventually hopped off the pitch before being replaced by George Marsh in the 77th minute. 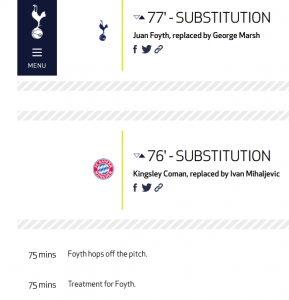 Foyth’s potential absence is bad news for Pochettino, as the Argentine international was expected to replace Kieran Trippier at right-back this season. Kyle Walker-Peters may have to be considered if Spurs don’t sign a defender before the transfer window shuts, as Serge Aurier is currently recovering from surgery on a hand injury.

There is a chance that Foyth hasn’t injured himself too badly and could return from in time for Spurs’ opening Premier League game against Aston Villa, but the situation doesn’t sound good. Spurs drew 2-2 with Bayern and won on penalties to clinch the Audi Cup, but Foyth’s injury is a low point of the evening.