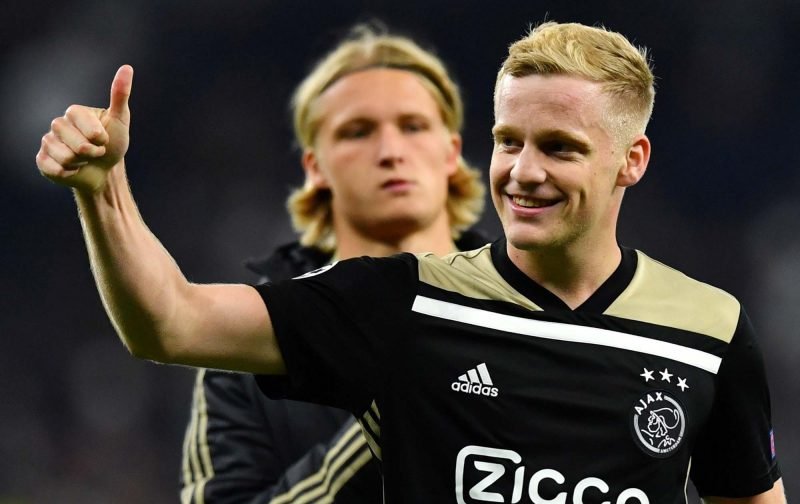 With the current lull in the Premier League fixture list, real news is hard to come by at Tottenham Hotspur, and there’s certainly been a spike in transfer speculation again as the press look to fill the column inches, but a long term favourite at the club was the potential of seeing Ajax star Donny van de Beek make the switch to White Hart Lane.

Having seen exactly what the talented Dutch 22-year-old can do in our Champions League campaign of 2018/19 in our ties against them, van de Beek has continued his impressive form in 2019/20 chipping in with 14 goals and seven assists in his 34 appearances so far this year.

Having been linked heavily with a move for him last summer and during the January transfer window, unfortunately, nothing ever came of our reported interest and there had been reports that a deal had already been done with La Liga giants Real Madrid.

The player himself has rubbished those claims this week, stating that he hasn’t yet made any decisions about his future.

“Playing in the sun is always nice, but no, I haven’t started taking Spanish classes. I still haven’t said ‘yes’ to anyone, it’s all open. I know what I have here, I’m loved by Ajax and I love Ajax. My feelings should be positive at a club, not only that they want me but also that I fit in their style of play. Of course, I also want to know the game time they will give me.”

Whilst plenty of Spurs fans will be no doubt hoping that this means we still have an opportunity to do a deal for him, I wouldn’t say you would describe Spurs as a ‘positive’ club right now given our own issues and I wouldn’t naturally think that Jose Mourinho’s style of play would suit him.

But money talks in football, we’ll have to see as plenty would like to see him on the pitch for us.