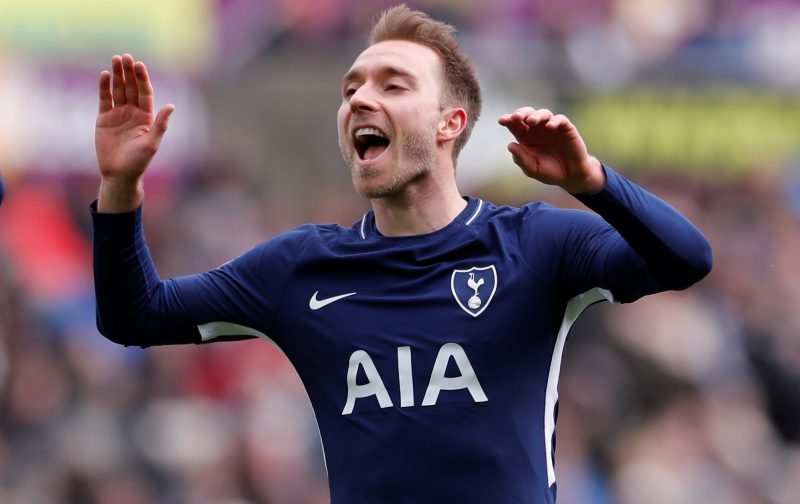 With the ongoing speculation concerning the future of Tottenham Hotspur star Christian Eriksen on the summer transfer rumour mill, many will be hoping that manager Mauricio Pochettino’s recent words on the player can be read into and that it gives a more than clear hint that the 27-year-old Danish international will be staying with us next season.

With so many claims and counterclaims about where he will be playing football next season, most outlet’s lean heavily on his own interview where he spoke about maybe wanting ‘to try something new’ as absolute proof that he sees his future away from the club, but that wasn’t my reading of it at the time and it still isn’t.

In a recent interview with Sky Sports Pochettino admitted that Eriksen had been given the option of staying behind in London if he wanted to train, but the player himself made the decision to travel as he wanted to play.

“It’s difficult for me to talk for the comment of the player, I wasn’t there, I don’t know. To be honest during my holiday I didn’t want to listen and see the media. Christian is here because I think he expects to play maybe Sunday against Juventus or Man United because he had a small, minor surgery after the final. That is why today rather than train with the group, he trained alone to try to avoid risk and it is possible to play Sunday. We gave him the option to stay in London but he wanted to come because the medical staff decided that he was available to play maybe and that is why he’s here. It was his decision with the club and medical staff.”

It won’t stop the speculation, of course, but maybe Eriksen isn’t as determined to leave as some have made out.