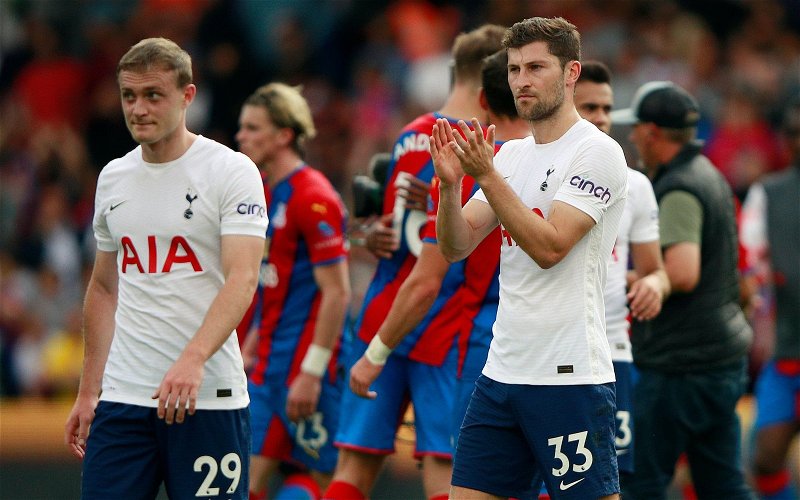 Spurs‘ dreadful performance away to Crystal Palace saw all three points go to the hosts as they battered Nuno Espirito Santo’s men 3-0, as Japhet Tanganga was shown a second yellow card moments after a scrap with Wilfried Zaha resulted in his first.

The game also saw Eric Dier taken off injured, but although at the time it potentially looked serious, there is a strong possibility that he could just miss the Chelsea game this weekend.

🤚“Even with eleven men I felt we was sloppy with the ball.”

😠“I felt we needed to be more proactive on the ball, which we was not.”#THFC | #COYS | #CRYTOTpic.twitter.com/4EPP1rmmA7

Meanwhile, the result was also the first time that Oliver Skipp ended up on the losing side while wearing a Spurs shirt, and the 20-year-old who’s birthday is in just two days believes that there are plenty of lessons to learn.

“Even with 11 men, I felt we were sloppy with the ball at times, and then you go a man down and it’s always difficult, especially in an atmosphere like this,” said Skipp. “The sending off didn’t help and it’s something we’ll look back on. There are definitely lessons to take from that game.

🎙 "We didn't create enough, we didn't have the ball enough and we made mistakes."

“We can’t get too down. We’ve had a good start with three wins (in the Premier League) and we’ll take the lessons from today. It shows there is improvement that needs to happen, regardless of the results. We’ll be looking to put it right in Europe on Thursday, as players, that’s our opportunity to put things right.”

Next up for Spurs is a trip to Rennes in the UEFA Europa Conference League on Thursday, before Spurs host Champions League holders and London rivals Chelsea in the Premier League on Sunday, where they are hopeful that Heung-Min Son, Steven Bergwijn, Cristian Romero and Giovani Lo Celso may all be ready for.