How could Spurs line-up if Kane left for City in a swap deal? 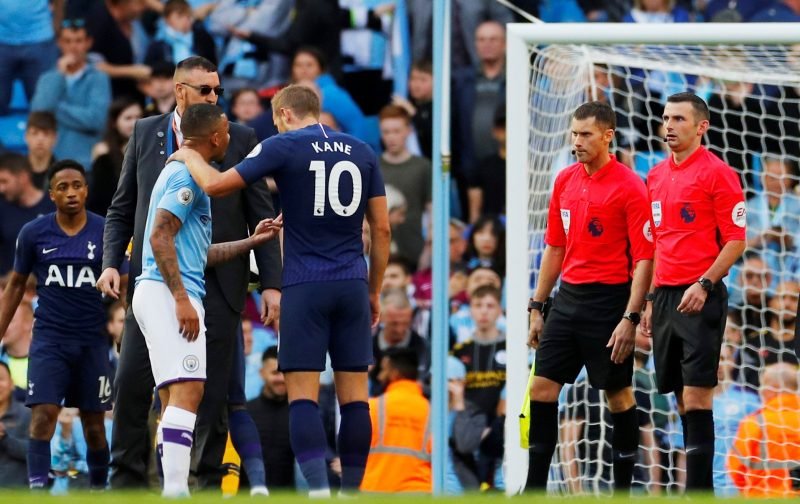 As speculation surrounding England captain and Spurs talisman Harry Kane’s future continues to grow, more and more names have begun to be thrown around.

Manchester City have been credited with interest in the striker, and they are believed to be hoping to offer a couple of players plus a fee to bring Kane to play under Pep Guardiola.

At the moment, the two players that look most likely to join Spurs from City if the swap deal is completed are Dutch centre-back Nathan Ake and Brazilian striker Gabriel Jesus.

If they joined, Spurs arguably would look a strong side – if they made suitable transfers to bolster the squad and improve the overall starting line-up in the absence of Kane. Here is how we think Spurs could line-up at the start of next season if he leaves in that swap-plus-cash deal.

Captain Lloris is expected to stay for at least the next season, despite interest in him from clubs in France. His top reflexes make him still one of the best keeper’s in the league, but due to his error-prone traits, the club may look to eventually replace him in the near future.

#Tottenham will look at right-back replacements for Serge Aurier if he leaves the club. #Spurs have a long- standing interest in Norwich's Max Aarons, but the club's next manager may decide to work with the current options available in his squad [@AlasdairGold]

With Serge Aurier expected t0 leave the club this summer, the club are again heavily linked with Norwich City star Aarons, who could be available for about £15-20 million more than what the Ivorian defender is expected to be sold for. England U21 international Aarons has impressed greatly since breaking into the first team at the Norfolk club, and if he joins the club, he would vastly improve the defence and offer something in attack too.

🇩🇰 Tottenham target Joachim Andersen is happy in London and would like to remain in the Premier League.

Lyon defender Andersen has spent the season on-loan at Fulham, and despite the West London club being relegated back to the Championship for next season, he had a fantastic first season in the Premier League, and a transfer to Spurs seems close. The Danish defender is keen to join the club and after being kept busy throughout last season and proving to be a leader and a solid centre-back, we expect him to make that spot his own in Spurs colours.

Tottenham are keen on both Gabriel Jesus and Nathan Aké and Manchester City could use at least one player as part of a deal for Harry Kane.

Left-footed centre-backs are becoming a more and more important part of the modern game, with the likes of Pep Guardiola speaking of the importance to have one in his team to maintain more control of the game and provide more balance and stability in the back-line. This is why we are very excited at the prospect of having Ake return to London but this time to represent Spurs should he be included in the swap deal for Kane.

While Reguilon has plenty to improve upon, the building blocks are there and he has all the potential required to shape him into a world class left-back. Primarily a wing-back, the Spanish defender was error-prone towards the end of this season in which he scored an own-goal and was at fault for many more, but up the other end he demonstrated fantastic crossing ability, speed and determination to create chances.

One of the first names on the team-sheet and the main reason that Oliver Skipp may find himself being sent out on-loan again next season or just on the bench is Danish warrior Hojbjerg. Scoring two goals for the club last season and setting-up a further four, he also showed that he is a threat on the attacking end too, but still has plenty of work to do in becoming more composed in front of goal – however the main reason he was bought last year was for his defensive abilities and he has definitely not disappointed.

Spurs’ record signing Ndombele had a much better year this season, earning the trust of former manager Jose Mourinho before being dropped by interim head coach Ryan Mason. After scoring important goals in the Europa League and FA Cup as well as some fantastic goals including the sensational lob against Sheffield United, Ndombele is expected to remain at the club this summer, especially if Antonio Conte is named manager.

Chelsea and Spurs in Jonas Hofmann fight as winger stars for Monchengladbach https://t.co/F408XH5OXd

German midfielder Hofmann has had a sensational year with Borussia Mönchengladbach this season, scoring six goals and assisting 11 more in the Bundesliga, being deployed virtually anywhere on the pitch from midfield to attack. He is a very similar type of player to Christian Eriksen, and he would make a great partner for Ndombele in the middle of the park but as a roaming playmaker, so expect him to pop up in little pockets of space all over the pitch like Dele Alli.

Whether Bale will return to the club next season is another question, but if we want the best possible success without Kane, having the Welshman in the team is a must. After finishing the season with a bang, scoring two goals against Leicester to take him up to 11 for the season in the Premier League also taking him top of the goals per minute charts for players with more than ten goals, Bale has shown he still has top-level ability and he needs to be given another chance next season.

Tottenham are interested in Manchester City striker Gabriel Jesus, which could lead to a cash-plus-swap deal for Harry Kane. (Star on Sunday) pic.twitter.com/baMSOQTOWB

Are there many strikers in world football who could be available and will do the job that Gabriel Jesus can do? The Brazilian is being linked heavily to Spurs in a deal that also involves Ake and Kane heading the other direction, and while no one wants to lose the England captain, the Manchester City man might just be one of the best options to replace him and it is a guarantee that he will score goals.

The Korean forward has just had his best ever season in terms of scoring and assisting, so he will be absolutely crucial next season, and if he continues to grow as a player, Spurs may just not miss Kane as much as first thought as Son can carry the team on his back occasionally too. However, we don’t want individuals scraping results, and he will need to form a fantastic partnership with Gabriel Jesus or Bale or whoever he is partnered with up top in order to fire the club into the Champions League places and beyond.