‘He could not care less’, ‘Sick of him’ – Loads of Tottenham fans slate star man despite comments 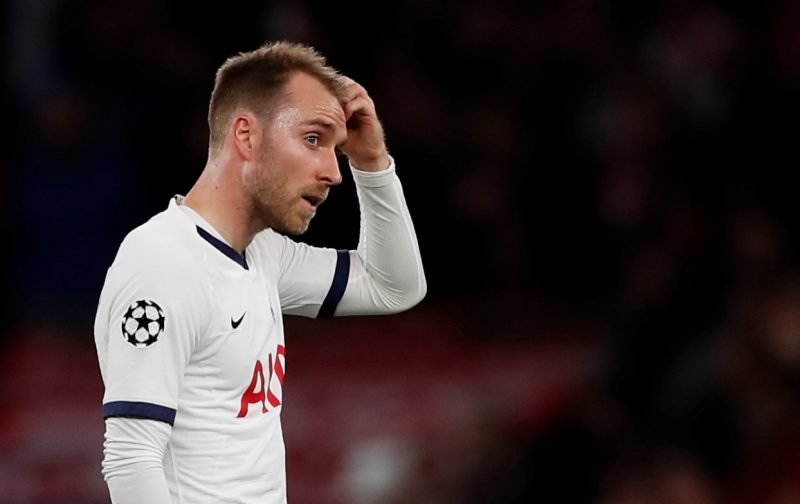 Christian Eriksen is far from the flavour of the month at Tottenham at the moment. The Lilywhites have taken issue with the midfielder for his shocking performances and supposed lack of trying in Spurs’ midfield so far this season after he failed to leave over the summer.

Christian Eriksen admits it’s his toughest period at Spurs and his poor form is not due to wanting to leave the club:

“Everyone is professional, in all clubs there’s talk of players who have to go away. That has no bearing on how we’ve performed so far this season.”#THFC #COYS pic.twitter.com/YNyhcEbfyN

Ricky Sacks, popular Tottenham fan on Twitter, has recently taken to the social media platform with some comments from Eriksen, and whilst the Dane has claimed that his poor form is not a result of wanting to leave the club, the fans simply aren’t buying it.

Plenty of them are now desperate to get the midfield man out of the club as quickly as possible, and whilst that might seem very harsh, his form and his wanting out of Tottenham are making him a player that the fans are struggling to get behind in any way, shape or form.

You can see exactly what they’ve had to say about Eriksen here:

Where to begin replying to his comments

Mmmm.. words are cheap .. he in particular has been detrimental to the teams performance and attitude .. he hasn’t turned up for months .. !!!

The Lilywhites have got very little time for Eriksen at the moment, and are keen to get rid of him as soon as possible.