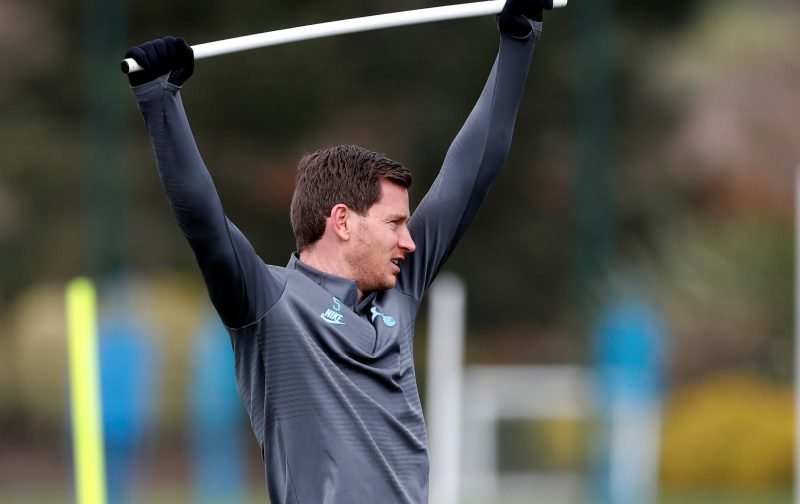 Lots of Tottenham Hotspur supporters have been left ‘very sad’ at claims the north London side will announce Jan Vertonghen’s exit on Sunday.

Spurs will confirm Vertonghen and goalkeeper Michel Vorm will be leaving the club on Sunday following the final day clash with Crystal Palace, at which point both will be free agents, according to Football Insider.

The pair agreed to sign short-term extensions to their current deals to cover the postponed final games of the season, but new long-term deals were not forthcoming and will play no part in the side’s future under Jose Mourinho.

Vertonghen had been a long-standing mainstay of the Tottenham side under Mauricio Pochettino but has been an infrequent addition to Mourinho’s plans, with the Portuguese tactician dipping the Belgian in and out of the starting line-up this season.

The £100,000-per-week centre-back heads into Sunday’s meeting with Palace on 315 games played for Tottenham across all competitions, over which he has scored 14 times and assisted a further seven goals while being shown 44 yellow cards and one straight red.

Plenty of Spurs supporters will be sad to see Vertonghen leave at the end of his contract, with many of the belief that the 33-year-old still has something to offer in the top-flight of English football.

gonna be depressed for a while once he leaves.
think we should retire the no. 5 shirt lol

i will be sad to see Vertonghen leave. He is still capable of doing a great job in the PL.

Gutted, Jan has been a rock from the start. He will get snapped up by another Prem team. This will come back to hunt us IMO. He still has a couple of seasons in him, He’s never been amazingly fast as well.

what a fantastic servant for our club. Apart from Ledley, the 2nd best defender I’ve seen at spurs. he hasn’t lost his quality, unfortunately injuries have caught up with him. he could probably get a year or two in italy. Super Jan.#coys

Vertonghen’s years of service in north London has left him fondly kept in the hearts of many Tottenham fans, with a few reacting to Football Insider’s report by hoping for a farewell fixture in the future rather than allowing him to simply walk away without any fanfare in an empty stadium.

They should offer him a one year extension purely because he deserves a proper send off with the fans there! #COYS

Wonderful club servant. Hopefully, he gets a send off from us at some stage next season.

Some Spurs supporters would love to see Vertonghen return to north London in the future for more than a testimonial fixture, with a potential role in the coaching set-up one position they would like to see the Belgian awarded.

It’s a shame we couldn’t give him a player/coach role! Really hope we see him back at the club in the near future