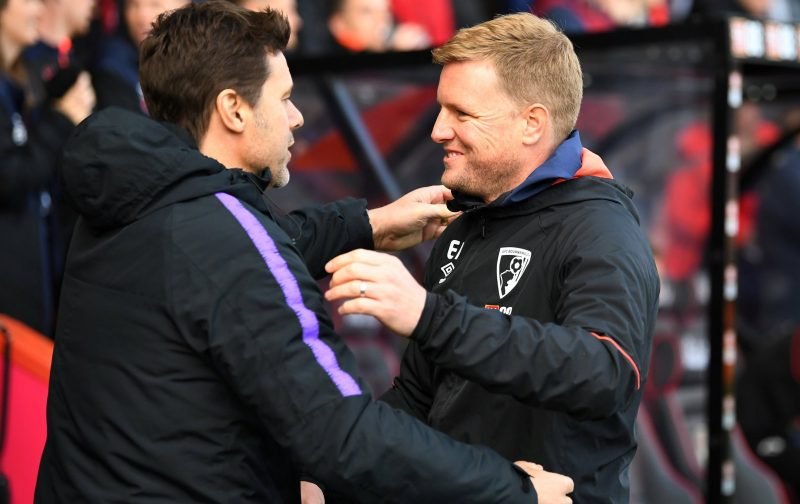 Mauricio Pochettino’s time at Tottenham is seemingly coming to an end, and a list of potential replacements has reportedly been drawn up.

[@TeleFootball] | If Spurs would wait until to the end of the season that would widen chairman Daniel Levy’s options and give him a more realistic chance of appointing Bournemouth’s Eddie Howe, RB Leipzig’s Julian Nagelsmann, or even England manager Gareth Southgate.#THFC #COYS pic.twitter.com/xknytyqmlc

According to The Telegraph, the likes of Julian Nagelsmann, Gareth Southgate and Eddie How are all reportedly managers Daniel Levy is keen on recruiting should Pochettino leave his post at Tottenham, with the report stating that the Argentine manager has one game left to save his job.

Despite reaching the Champions League final last season, Pochettino is under increasing pressure after an awful start to the season that has only seen Spurs win three games in the Premier League, resulting in Tottenham sitting in 14th in the league table.

Yet despite this horrendous form, some Tottenham supporters on social media didn’t think Howe, who has taken Bournemouth from the pits of League Two to a Premier League regular, would be a good successor to Pochettino at Tottenham.

Why the hell would you wait to get howe or Southgate? Makes sense waiting to get allegri. Either way, think poch is finished. He doesn’t have the same motivation anymore and it’s rubbed off on an already demotivated squad. Just going thru the motions. No leaders in the team.

I’d rather keep Poch than get any of these jokers.

This would be a disaster

Why would we wait for a worse option?

None of those names I’d swap for Poch regardless of our situation.

Howe’s Bournemouth are currently ahead of Spurs in the Premier League.