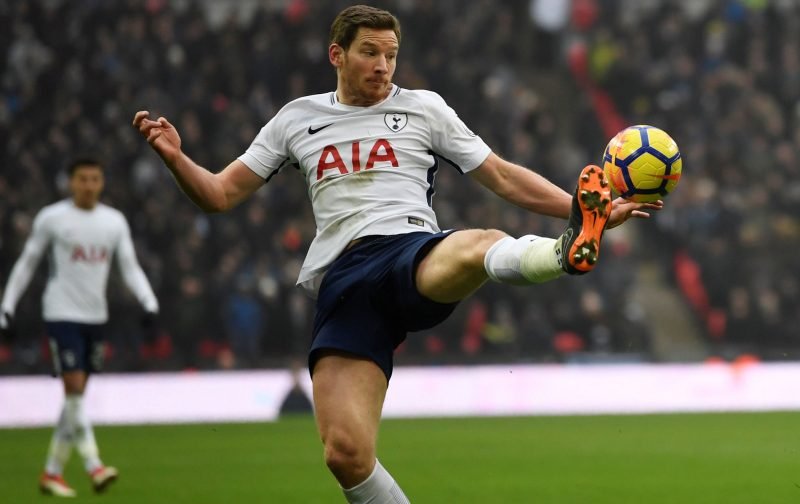 One big talking point that inadvertently came out of our opening 2019/20 Premier League clash with Aston Villa, was the curious omission of centre-half Jan Vertonghen.

There won’t be many Spurs fans who aren’t aware of manager Mauricio Pochettino’s reaction to being questioned about Verts in his post game press conference, nor the unsubstantiated claims that the Belgian international was furious with the decision and now Sky Sports pundit Danny Higginbotham has had his say.

Speaking to Sky Sports News on Thursday (10.30am), the former defender echoed what I imagine are the thoughts of plenty of fans to the development.

“It was a big surprise. I think Pochettino was asked about it afterwards and he just talked about using the squad and what have you. But, for me, there isn’t much of a better partnership in the Premier League than Alderweireld and Vertonghen. So, I think what we have to do now is look at the Manchester City game and say, ‘right, if it’s once against Alderweireld and Sanchez’ then there are questions to be asked. This is arguably Tottenham’s biggest test coming up and that’s where you want your best team as much as possible. It will be good to see the teamsheet when it comes in and then we can evaluate it from there.”

Having already commented myself that the Manchester City team selection will probably clear up the truth given all the claims here, I can certainly see why Higginbotham makes the same suggestion, but as he spoke he didn’t have the latest set of images from training that the club sent out on social media, and Verts looks ‘none-furious’ enough for me.

The comments were pretty predictable, and along the same lines.

8 Shots, 2 Key Passes & Spurs Are Up & Running – Some Fans Won’t Agree With MotM