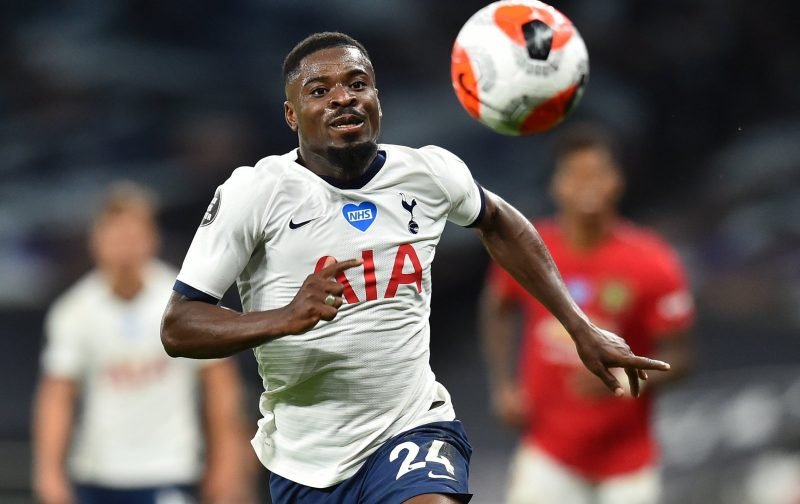 Lots of Tottenham Hotspur supporters have been agreeing with Jermain Jenas on social media, after the BT Sport pundit urged Spurs to sign two new full-backs in the summer transfer window.

Jenas strongly believes Jose Mourinho’s current options, Serge Aurier and Ben Davies, fall well below the par needed for their positions in the modern game, which has seen Liverpool run teams ragged through their use of Andrew Robertson and Trent Alexander-Arnold.

Alexander-Arnold is the Premier League’s second-most creative player this season with 13 assists from right-back under Jurgen Klopp, while only Manchester City’s Kevin de Bruyne (126) and Aston Villa’s Jack Grealish (90) have played more key balls than the England international (87).

Everton’s Lucas Digne is also near to the top of the list in eighth place for key balls this term (70), whereas the top-ranked Spurs man is Heung-Min Son in 32nd having played 41 key balls heading into the final game of the campaign.

Aurier, on the other hand, has managed 33 key passes and delivered just 20 accurate crosses from 134 attempts, per WhoScored data, while Davies has managed nine accurate deliveries from 28 attempts and recorded just eight key passes.

If Spurs are to improve next season and move back closer to winning silverware, Jenas is adamant that the full-backs is the area Mourinho must improve the most – even if it means Chairman Daniel Levy not spending on any other area of the pitch.

“The best teams at the minute build around their width and teams like to play with inverted forwards so they get their width from the full-backs,” Jenas told Football.London.

“Spurs don’t have anywhere near enough quality or the dynamic element that they need in the league right now. That’s where I would start right now.

“If that’s all the money I have to spend this summer, that’s where I’d spend it because I’d be saying I’ve got Toby Alderweireld, Davinson Sanchez and Jan Vertonghen, give him at least until January or next year, and then I could start working on my defence.

“I do think that would change Tottenham and their style of play drastically if they get two new full-backs.”

Totally agree with him, we were a much better side when walker and rose were there

Correct. Aurier and Davies may have been a short term fix but if you want to win things, buy top quality…with pace and attacking intent

It’s so clear to see. If we had full backs who can deliver quality balls into and around the box we’d score so many goals. Ours get into good positions but the delivery is atrocious.

Not rocket science is it? The two we have now are hopeless.

Improving Mourinho’s full-back options is not the only area some supporters would urge Levy to invest in, though, with many fans crying out for the north London side to add strength in depth across the field in the transfer window.

Mourinho currently only has one recognised out-and-out senior centre-forward at the club in Harry Kane, while supporters also have question marks over the quality of their club’s midfield options.

Exactly. Add to that a solid DM and a backup no.9 and we’re title contenders imo.

Right back, Centre back, defensive mid, back up striker and someone with creativity in centre mid. Also a different Pundit for Jermaine Jenas as he’s a walloper!

Couldn’t agree more. 2 starting FBs & a top DM would transform the team. Cover for Kane (a hold up CF who can head the ball) and with limited money I’d stop there. FBs were key to Poch’s success as shown by poor results when he rotated, from the best 2 in the PL to …

It’s obvious we will be looking at 2 full backs anyway, we have only 1 in each position. Likely we use Cirkin as second choice and maybe bring back KWP for cover but I’d say that’s even more of a step back.

For some supporters, Ryan Sessegnon should be given the chance to prove his worth at the left full-back role next season, having struggled for game time in his maiden campaign at the club after a string of injuries.

Sessegnon has managed just 12 outings across all competitions and was last seen on the pitch at the end of January when he played a full 90-minute outing against Norwich City.

Def right back but could sessegon not be the answer on the left?

Jenas needs to chill, we only need a Rightback.. Sessegnon will get better and better.